In this blog I want to look at a few ways we might utilize Folder Tracks in audio post production workflows to help better manage and simplify the increasingly large and complex sessions. The areas I want to have a first look at are dealing with sessions with higher track counts and clear sections or type of audio, then using folder tracks to speed up sound design and finally dealing with the large amounts of incoming media and versions. Before we jump into the examples, I wanted to very quickly mention as we develop a new feature, we work hard take advice from a variety of Pro Tools users across all areas of the industry. This is partly the reason for the two folder track types Basic and Routing– but it’s also why we allow users to route the audio without restriction in the methods they are familiar with – even while using folders. This is important because in audio post production, for instance a source or auxiliary bus may feed multiple mix versions, frequently including music and effect mixes. Another great example of this might be in a session for Atmos where you have many object tracks which have their own output, but you would like to group those objects together. Folders have no restrictions that prevent their use in these cases – which makes them super powerful organizational tools.

An obvious use for folders would be to sort your session into more manageable sections. Existing sessions can be updated easily using the Convert Aux to Routing Folder function.

Often engineers will be working from a well establish template, but they can get large and complex, so let’s look at how would go about converting a session or template to add the folder functionality to simplify operation. In the following example, the session has been split into Narration, Dialog, Music, Atmospheres, Foley, Effects for mixing. However, by organizing them in these folders it makes even larger sessions easier to see all at once and allow you to focus on the section you are working on at any given time. To convert what was an auxiliary into a folder, simply right click and select “Convert Aux to Routing Folder”. This will change the Aux to a Routing folder but retain all the bussing, plugins and other track properties. You can then take the associated tracks and simply drop them into that folder. Additionally, you can use the reverse bus interrogation feature “show only assignments to” which will then display only the tracks already assigned to that Aux. This is very powerful when you’re modifying an existing template or updating an existing session. 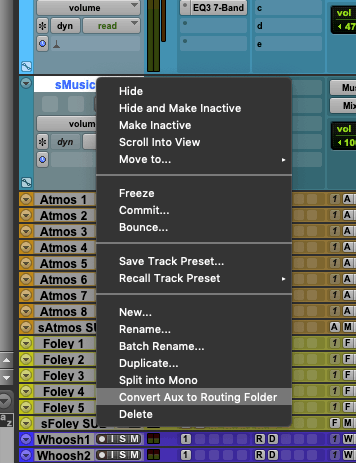 Right Click on an Auxiliary to convert to a Routing Folder

Repeating this for all the main Auxiliaries in the session gives us a much cleaner overview of the session.

Given that routing folders have the same functionality as an Auxiliary, you can still easily freeze, commit and use as bounce sources when providing stems.

In Sound design use, you might keep a more complex arrangement of effects or building blocks in a folder. This way the whole arrangement can be moved, copied and pasted together, but the folder can also be opened to tweak levels or timing of individual elements as required. In this way it makes it easy to select a group of sounds and place it later in the timeline for a repeating graphic effect or visual. In this example I have a small piece of sound design I made for an Avid Logo. Rather than simply placing the audio on tracks labelled ‘SFX’ for example as I might have previously keeping the specific tracks in a folder, I can see the individual items from the folder overview. By using the shortcut or clicking on the folder Icon I can see the folder contents and make small timing and level adjustments as needed.

Duplicating and nudging a basic arrangement of SFX using a folder

In audio post production you often get updates to pictures and AAF files. Being able to keep these files in named folders and have a single control to mute them allows you to keep a record of changes as you work through your session in a compact but easily recallable way. As Video tracks can also be added to folders, a nice idea might to be keep previous picture versions safely tucked away in a basic folder in case you need to refer to them again at a later stage. You can import an AAF or other material into a specific folder by selecting it before import. The tracks will import into that selected folder.

Once in a folder I have very quick controls to mute, solo, delete and make inactive for example if required, a group of information that I might only need occasionally.

These are just a few ideas as I thought about how I would apply this new feature to my work, attempting to make my workflow in audio post production more efficient. I hope you find this new addition to Pro Tools as helpful as I do.