Upgrade two auditoriums with live consoles that can support a fast-paced schedule and the growing church’s diverse audio needs.

After extensive research—and with a careful eye toward expandability and versatility—Stagl and the North Point team concluded that Avid live systems were the best overall choice for the growing church’s diverse audio needs.

“We originally purchased two D-Show System for use at FOH,” Stagl remarks. “We really liked the dramatic sound quality improvement they made in our PA system overall. Since then, we’ve expanded the lineup at our Alpharetta campus by moving our existing D-Show Systems to run monitors, while adding two new Profile Systems at FOH.”

Both North Point auditoriums feature similar audio configurations based around an end-to-end Avid workflow. An Avid VENUE | Profile System sits at FOH and connects to two Stage Rack that host a total of 96 inputs. The D-Show Systems at the monitor position each connect to two Stage Racks, loaded with 24 analog outputs feeding a mix of hardwired and RF in-ear monitors. Both Profile Systems utilize dual HDx Option Cards that connect to a Pro Tools | HD (now Pro Tools | Ultimate) system, providing 96 channels of recording and playback in each auditorium. Each monitor console is loaded with a single HDx card connected to a Pro Tools | HD Native system.

With the church in a fairly consistent growth mode and hosting an active schedule of events requiring audio support, Stagl cites ease-of-use as a critical asset that keeps him coming back to Avid live systems year after year. “We made our first investment in D-Show Systems back in 2006, and we found it really easy to transition our team from analog into the world of digital. Since then we’ve continued to add Avid consoles to our lineup. At last count we had 15 systems across our five campuses.”

Ready to mix on day one

I've been an Avid user for many years, and I’m pleased with how the systems continue to evolve.

“Virtual Soundcheck literally revolutionized our mixes,” Stagl says. “We record all our rehearsals into Pro Tools and use Virtual Soundcheck to refine the mixes, without requiring the band to play ad nauseam. I then store a snapshot as a starting point for each song in the set, along with its own customized settings for easy recall later. Virtual Soundcheck is particularly useful when teaching volunteers. In fact, when we recently replaced our analog monitor consoles with D-Show Systems, I was able to start training our volunteers by using Virtual Soundcheck with tracks from actual services. Our crew was ready to mix on day one!” 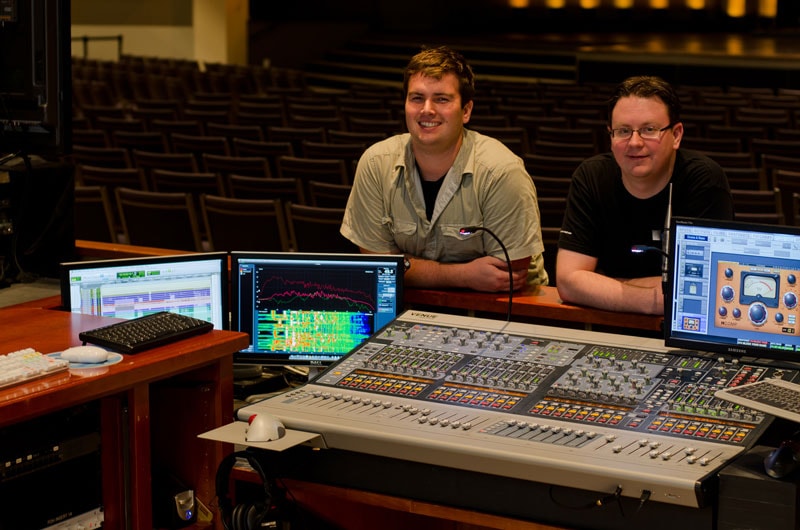 Ultimately it’s Avid live systems’ ever-expanding feature set that excites Stagl the most. “I’ve been an Avid user for many years, and I’m pleased with how the systems continue to evolve. I’m constantly learning something new and that’s a creative freedom that few other consoles can deliver.”