Interview with Ryan AxeâPart Two: The Role of the Assistant Editor

Assistant Editors need video editing and media management solutions that are capable of supporting the needs of various types of projects and editorsâ expectations.

As one of many assistant editor’s duties you should prep the editing system for the editor, log footage into the system, sync and transcode the rushes. How do you do this? Is it a long task?

The answer to this really depends on the editor that you’re assisting and the requirements and demands of the production. Every editor works a different way and every production will have a different workflow, so you have to adapt to the needs of both.

I will outline the process that we went through with Eddie as a guideline.

On Kingsman: The Golden Circle and Mission: Impossible – Fallout we’d receive MXF Avid media and H264 files for PIX from the digital lab, as well as Avid bins with master clips and synced subclips per camera roll, which we’d then combine into single bins for each day of shooting.

The trainee usually organizes all the paperwork and fills in the metadata for the master clips while referencing the continuity and camera sheets, then helps with the other tasks when finished.

The rest of the team will split out the synced subclips between us and check the accuracy of the sync using the "Perf Slip" function in Avid. This is only available if you ticked the “Film” option when setting up your Avid project. It lets you slip the sound in ¼ of a frame increments rather than 1 frame increments so that you get the most accurate sync possible.

We added a red marker to each subclip to signal action and further markers every time there was a reset/interruption in the middle of a take. This way, Eddie could jump straight between the markers and watch the dailies uninterrupted, rather than having to waste time watching the camera reset. We’d then add a suffix to the end of the subclip name to signify how many resets there are in a take, so if Eddie saw a “x10” on the end of a clip he knew there were 10 instances of action within the 1st take, and this made sure he didn’t miss anything.

We’d also add a "+" on the end to signal selected takes, MOS for takes without sound, PLATE and BALLS for VFX elements, and for slow-motion shots we’d add the FPS, then create a respeed subclip and add a 24fps on the name so you knew which was which. 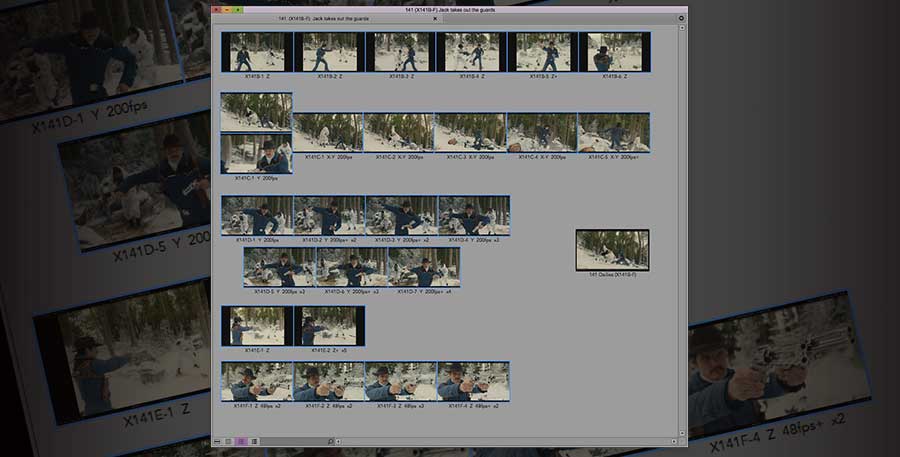 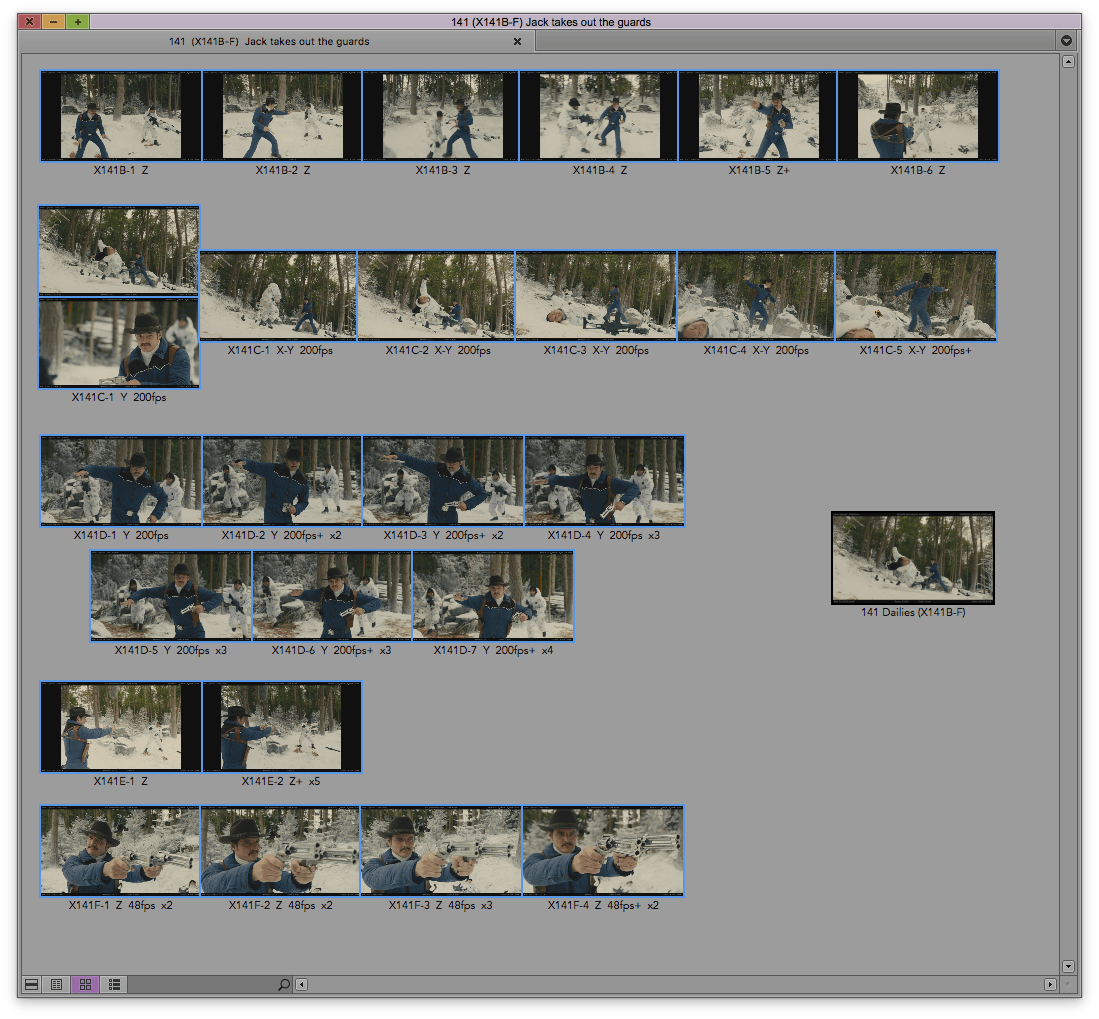 If there were multiple cameras covering a scene we’d make group clips and add the camera letters to the clip name. So referencing all the above you could end up with a clip that has the name "102A-1 A-B-C 48fps+" which tells us the slate, take, cameras, frame rate and whether it’s a selected take.

The subclips get organized into scene bins and set to thumbnail view. Sometimes we have several bins per scene if there’s a large number of clips as Eddie doesn’t want to have to scroll up and down to see everything. In this instance, we’ll add the slates to the end of the bin name so you can see which slates reside in each bin for that scene.

We set the thumbnail to a representative frame for each take so that Eddie can clearly see what each shot looks like at a glance. If there are changes in composition throughout a take we’ll show that progression through the thumbnails as well. For example, if there are 10 takes then take 1 would show the beginning, take 5 the middle and take 10 the end. We’d do this by marking an in point on the frame we want for each take, selecting all the clips in the bin while in thumbnail view, and then hitting the "Go To In-point" button. This will jump the thumbnail to each selected frame. 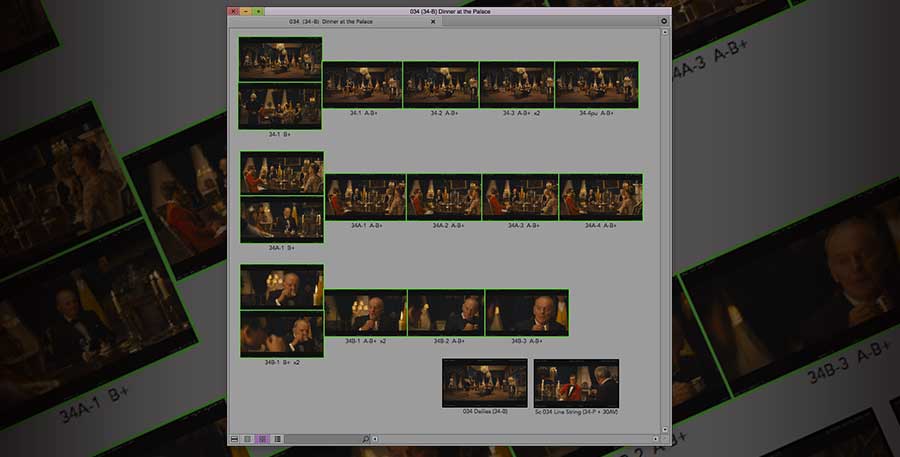 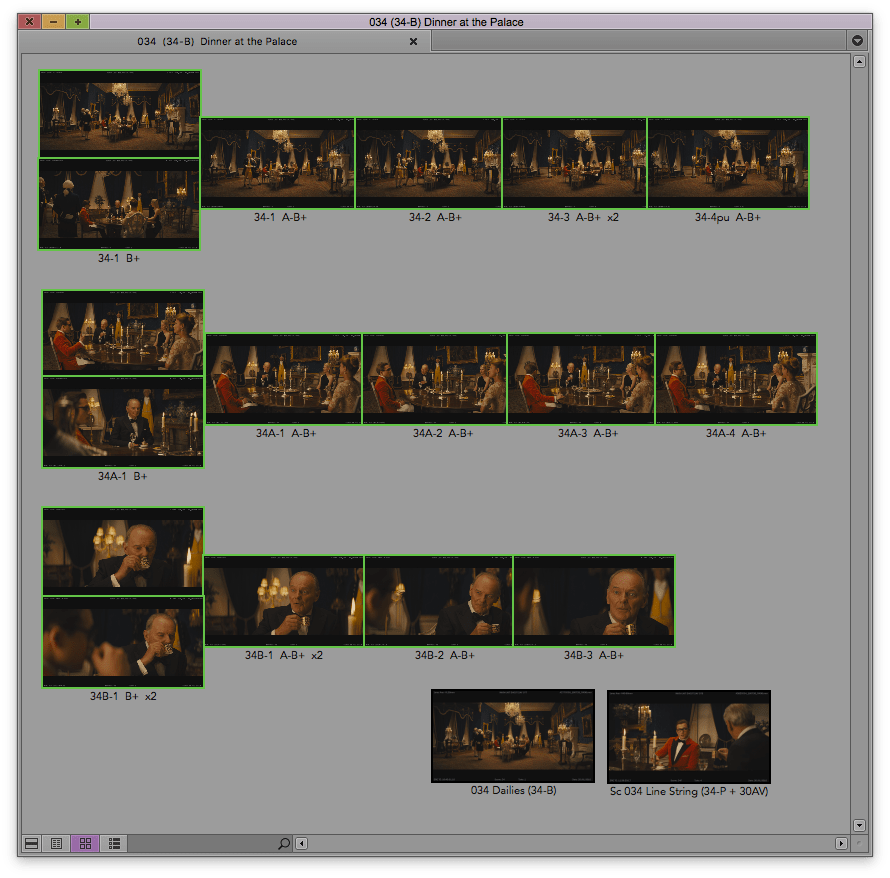 Each setup is separated and spaced out evenly, with takes bunched up together to utilize space and keep the presentation clean. For multi-cam, we’d only have the group clips in the scene bin, but we kept one subclip for each camera that we’d stack together to the left of the groups. This way, Eddie can quickly see a thumbnail that showed what angle each camera was covering.

Each scene bin would have a dailies sequence in, so you could quickly review all the footage in slate order.

If there’s dialogue for a scene we’d make a "line string", where we take each individual line of dialogue from every take and cut them back to back in a sequence. This allows the editor and director to quickly review alternates for each line with uninterrupted playback, rather than scrolling through all the takes manually. 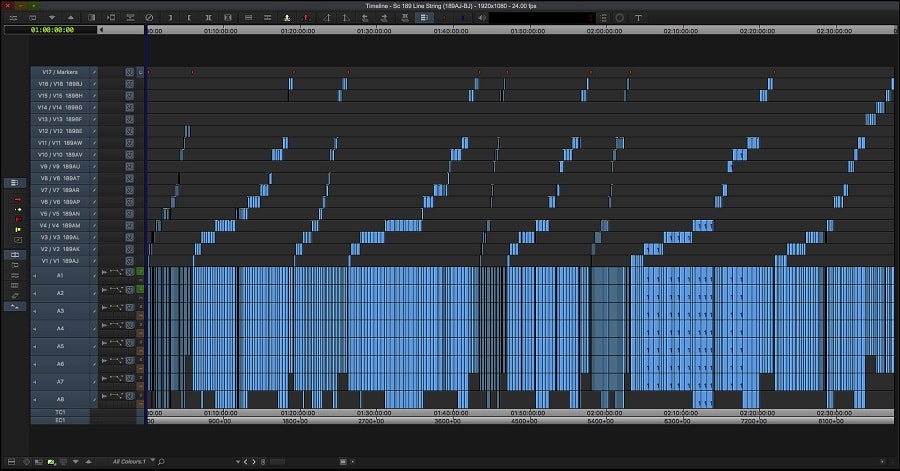 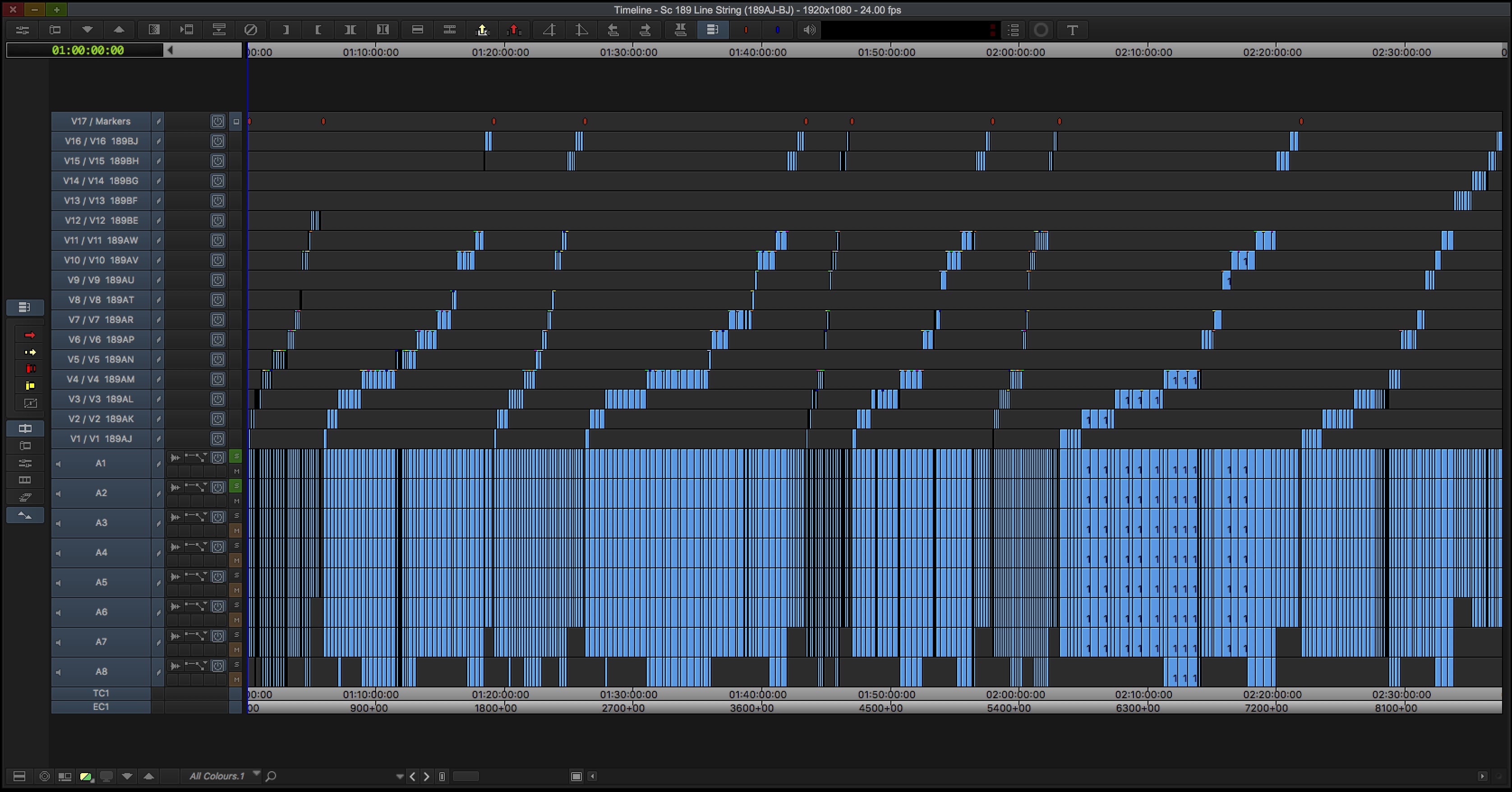 We’d add a marker for each line and write out the dialogue in the comments column, and have each setup on a different labelled track in the timeline. Then we can see at a glance what dialogue each setup covers. For example, while looking for a close up for a particular line you can jump straight to the marker for that line, scroll to the close-up, and play the readings back-to-back to find the best one. Think of it like ScriptSync but timeline-based.

Once Eddie had the scene bins, we’d export text files of the metadata and jpeg images that we’d import into our FileMaker database so we had a record of every take that was shot for the film, which we could then reference and use for paperwork and manage the VFX.

Dailies would get distributed to the crew and studio via PIX, and on MI6 we’d download the PIX files on to iPads so the HODs could review on set.

Those were our main tasks during the shoot. When you go into post production, your main responsibilities will be keeping the other departments (sound, music, VFX, marketing) up to date with the latest cut of the film. You’ll receive files back from them and line them up for the editor and director to review. There will be quality control, exporting sequences and prepping screenings, temp VFX comps and sound design, as well as many other things.

Is organization the key to being a successful assistant editor?

Organization is very important, because in a hectic film environment you’ll need to be able to find things fast. If somebody wants to look at a shot from a particular shoot, or look at an old version of a cut or visual effect, you need to be able to find it quickly under pressure, and not waste time searching for it. I think it’s well worth spending the extra time to organize your project and media. 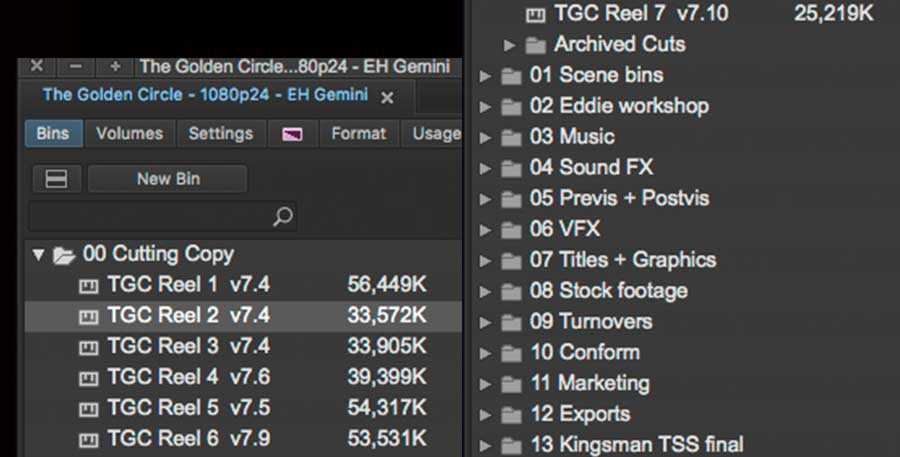 The approach that should be taken—is if you took over a project—what state would you like it to be in? Someone who isn’t familiar with the project at all should be able to sit down and find everything easily. The only way to achieve this is to be organized, and label everything. Even down to the timeline we have each track labeled, so you know what media sits on each track.

The same goes for our shared storage on the NEXIS, which is broken down into partitions including video, audio, SFX, music, VFX and render, among others. We have a partition called Consolidate (where we keep paperwork, exports and source files that we’ve imported into the Avid).

While organization is very important, I wouldn’t say it’s the key to being successful, as there are many attributes that make a good assistant. You need to be meticulous, resourceful, good at problem solving under pressure and managing workload, and good at staff management when you become a first assistant and have a team underneath you. Most importantly, you need to understand the political side of the cutting room and hierarchy. Know when to say yes or no, when to give an opinion or stay silent, and when to seek permission. To respect the high security of big productions, these are things that have consequences, so always take a moment to consider before you speak or act. 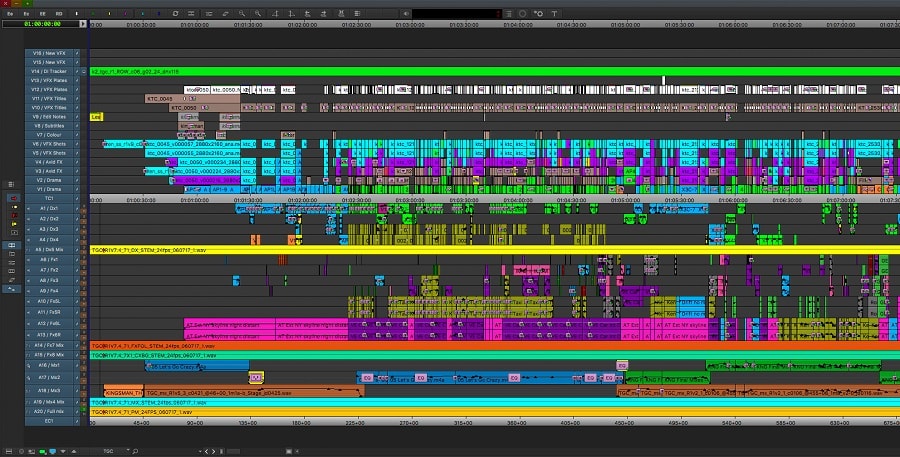 Screenshot of the Avid timeline for Kingsman: The Golden Circle, Reel 1

Is assistant editing a good combination of technical tasks and creativity?

It’s definitely more technical, that’s the nature of the job. The assistants are there so the editor can focus fully on creative decisions. Any chance we get to be creative will be dependent on the editor asking for something, like doing temp VFX or sound design. I did a lot of temp VFX work on Kingsman and Mission because not only are they VFX heavy films, but Eddie also likes the edit to look as polished as possible. We’d remove green screens as soon as Eddie had done an assembly, and he’d do a lot of split screens and use elements from several shots that needed blending together. He’d tell us what he wanted and then we’d have to figure out how to do it.

There was also a point where Eddie told us all to cut a trailer for MI6 and we had a mini-competition for fun. If you have an editor that encourages creativity, then it certainly can make the job more creative.

Continue the Interview with Ryan Axe: Working with Leading Editors