The Evolution of Drum Machines

Drum machines, whether hardware instruments or plugins, are a central part of modern music production in almost every genre. The story of Pro Tools is closely linked with the development of sample-based drum machines in the 1980s. Going further back, the first commercial instruments—such as Wurlitzer’s Sideman—date back to the late 50s.

The early drum machines were created as a rhythmic accompaniment for live performers, typically for solo organ players. They were the equivalent of the rhythm tracks on a home keyboard, organ, or “arranger keyboard.” Their sounds were generated electronically, and did not sound much like an acoustic drum kit. However, some designers experimented with tape loop systems which sounded more like real drums.

Similarly, the classic Roland drum machines of the 80s were conceived as devices that could stand in for a real drummer, accompanying live musicians in small venues. Again, their synthetically generated sounds were approximations of acoustic drums and percussion. However, rather than replacing drummers, their unique sounds were embraced by generations of pop, hip-hop, dance, and electronic musicians, and are now as much a part of modern music as traditional drums.

In the 60s and 70s the pioneers that would later go on to found Korg and Roland developed classic machines like those in the MiniPops and Rhythm Ace ranges. These could be played manually but their patterns were preset. These drum machines began to get noticed and used on records by more adventurous rock, funk, and jazz musicians.

In the 60s and 70s the pioneers that would later go on to found Korg and Roland developed classic machines like those in the MiniPops and Rhythm Ace ranges. These could be played manually but their patterns were preset. These drum machines began to get noticed and used on records by more adventurous rock, funk, and jazz musicians.

The next generation of machines were programmable, meaning you could create your own patterns. Just take a look at the Eko ComputeRhythm from 1972, and you can already see the familiar lanes grid still used on many drum sequencers now, including Pro Tools | GrooveCell virtual drum machine.

Drum Machines of the 80s

1980 was a massive year for the drum machine, seeing the launch of both the Roland TR-808 and the Linn LM-1. These represent two different approaches to electronic drums: synthesis and sampling. The 808 is the classic synth drum machine, as popular today as it’s even been, and part of the core sound palette of hip-hop, trap, R&B, and pop music in general. 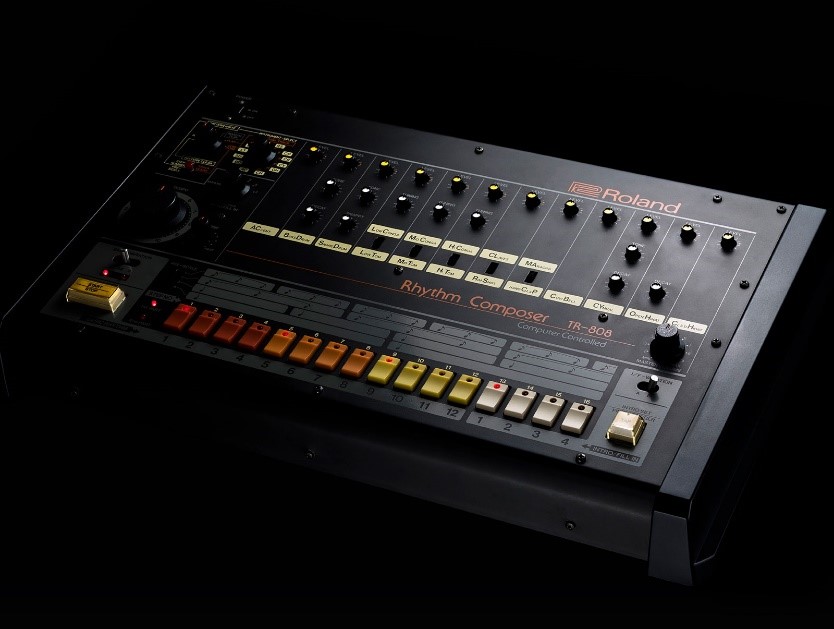 The Linn drum machine pioneered the use of sampled sounds. Its creator, Rogen Linn, went on to design Akai’s MPC, which remains the blueprint for modern sampling drum workstations. But for most of the 80s, the kings of sampled drums were the Linn, Oberheim’s DMX and DX, the Sequential Circuits Drum-Traks, E-mu's Drumulator, and the Yamaha RX11. Later, E-mu's SP-1200 quickly became the hip-hop producer’s weapon of choice, as it had onboard sampling. The MPC came hot on its heels at the end of the decade.

The Pro Tools origin story starts with the Drumulator, and a set of sound replacement chips created by Peter Gotcher and Evan Brooks. Digidrums was the first incarnation of Digidesign (which later became part of Avid) and grew to offer multiple sound sets for the Drumulator, Drum-Traks, and DX. The “Rock Drums” chip set was a particular favorite and can be heard on tracks like “Shout” by Tears for Fears. 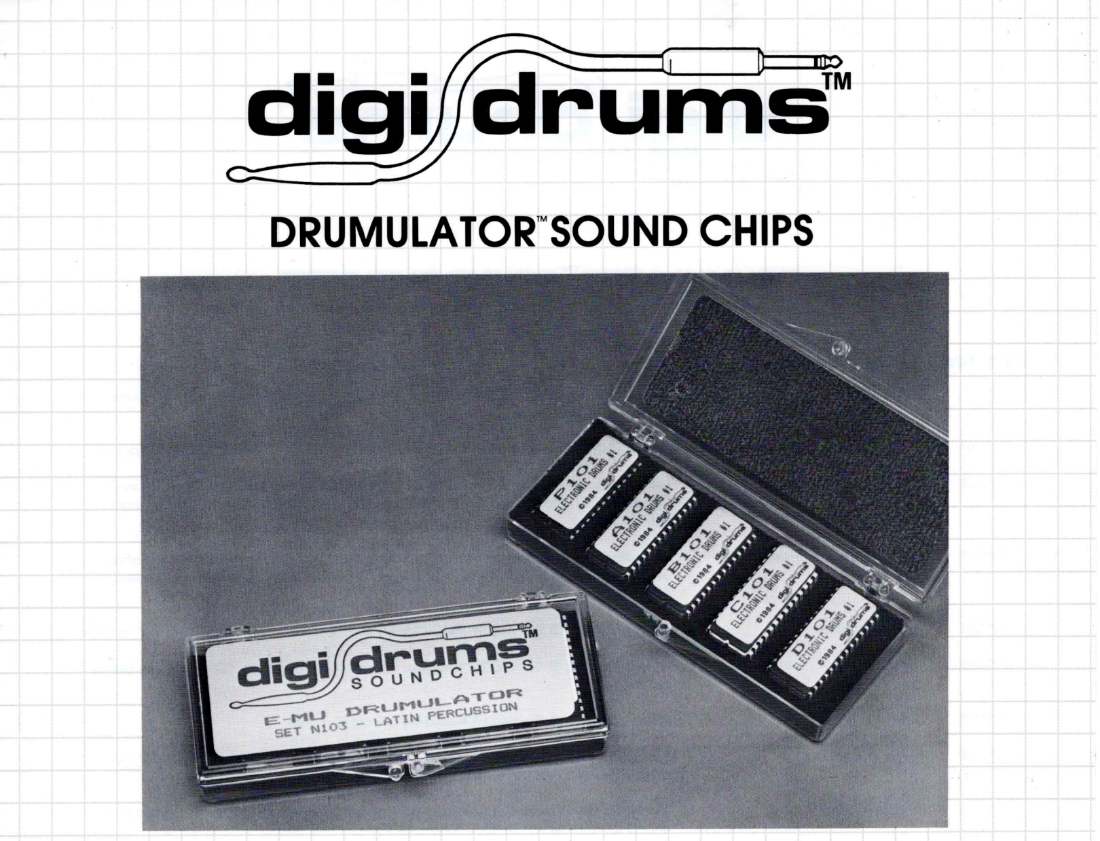 Drum Machines of the 90s

Through the 90s, hardware samplers controlled by MIDI sequencers began to take over a lot of the work of dedicated drum machines. As well as their MPC, Akai Pro produced the classic S-series rackmount samplers that were seen in most studios during this period. Digidesign expanded the Sound Designer software they’d created for sample manipulation into an editor that could work directly with sampler hardware, starting with the Emulator II.

Alongside this, Digi’ created one of the first dedicated computer-based sampling systems: SampleCell. This used an expansion card controlled by software or a plugin. When used alongside a Pro Tools system, the cards could be connected and audio from the sampler routed internally into your DAW. This workflow is now standard with any sampler plugin.

The 90s was also when we saw the first “grooveboxes” appear on the market. Roland coined the term for their MC-303. A groovebox is typically a standalone unit that combines a drum machine, sequenced synth/sampler voices, and effects. This creates a performance instrument that is good for sketching out songs or beats, and also for playing live. As well as Roland, Korg produced some classic grooveboxes in the Electribe range. The MPC fits into the category, although is usually called a workstation on account of its versatility and ability to record audio. Modern equivalents include Novation’s Circuits, Roland’s MC-707, Native Instruments’ Maschine, and all of Elektron’s instruments.

Beats in the Box

Moving into the new century, many producers began to work extensively “in the box”, which is another way to say in a computer-based DAW. The power of modern computers meant that plugins could do the jobs of hardware devices.

Some plugins like Native Instruments’ Battery are drum sound modules with no internal sequencer, allowing you to play and arrange drums using the MIDI features in your DAW. Another category is virtual drummers: Plugins that help you create an authentic sounding rhythm track when a human drummer isn’t available. Examples are Virtual Drummer from UJAM, and EZdrummer from Toontrack.

Many virtual drum machines emulate the classic hardware drum machine workflow. One of the earliest software emulations was ReBirth from Propellerhead Software (now Reason Studios) which emulated the 808 and 909 drum machines. All the classic Roland instruments are now available as plugins as part of Roland Cloud.

Popular beat-making plugins like Native Instruments’ Maschine and Akai Pro’s MPC give producers the option to use their DAW’s built-in sequencing features, or those of the plugin, or a combination of both. Pro Tools | GrooveCell is the drum machine plugin that comes as standard with Pro Tools. Like these iconic hardware workstations, GrooveCell can be played live by finger drummers or step sequenced using its own pattern grid. 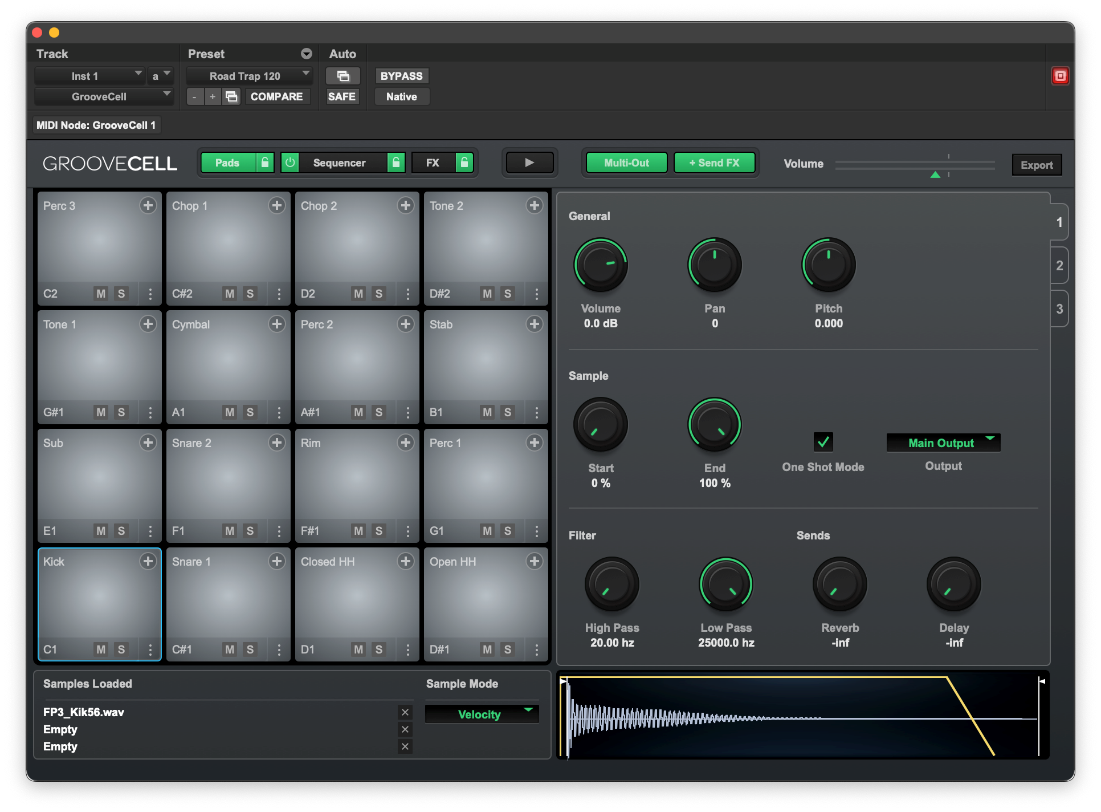 What is a drum machine?

A drum machine is a hardware or software instrument that mainly generates drum and percussion sounds.

Is a drum machine a sequencer?

A sequencer lets you record, edit, and playback sequences of notes and triggers. Many drum machines have a sequencer built in for creating and playing patterns from the internal sounds. Often a drum machine can sequence other instruments as well, using MIDI.

What is a groovebox or production workstation?

A groovebox or workstation is a device or plugin that combines a drum machine and sequencer with synth or melodic sampler tracks. It lets you create or play beats and songs in one place. Examples are Novation Circuit, Akai Pro MPC, Native Instruments Maschine, Roland MC-707 and Elektron Syntakt.

What is a sampler?

A sampler is an instrument that generates sounds using digital audio files. Some samplers can only play back, while others can record (“sample”) audio directly. Pro Tools | GrooveCell is an example of a sample-based drum machine plugin.

What is the most realistic sounding drum machine?

Drum machines that use samples can recreate the sounds of real acoustic drums. Synth drum machines can simulate real drums and percussion or generate entirely electronic sounds. For a realistic sounding drum performance, a sampled kit needs to use multiple samples for each drum, cymbal, or percussion instrument. Samples are often recorded at different strengths (velocities) so that you can get a dynamic and convincing response when playing the drums from a keyboard or trigger pads. By using multiple samples, each hit will sound slightly different and less artificial.

What are drum packs, add-ons, or expansions?

Most drum machines and plugins allow you to load your own drum sounds or buy kits created by sound designers. Expansion packs often focus on particular types of kits (for example acoustic drums, or classic drum machines) or styles of music (like Drill or EDM).

What is the most popular drum machine?

Drum plugins are really convenient because they are contained inside your project and require very little set-up. It’s easy to get samples into them from your computer, and the settings will be remembered next time you open the project. A hardware drum machine can be more expensive, and needs connecting to your studio, but playing and working with a physical instrument away from the computer can sometimes feel more creative and fun.

How do I keep my drum machine in time with my other gear and DAW?

If you’re using a drum machine plugin it will automatically stay synchronized with your project’s tempo and timeline position. Hardware drum machines use various ways of “syncing” with other devices and your computer. The most common on modern devices is MIDI Beat Clock, which is sent over MIDI cables or USB. There will be a setting on your device that will let you set it to follow or generate MIDI clock. DAWs like Pro Tools also have settings where you can choose which devices are sending or receiving clock. Ableton Link is another system that some devices and DAWs (including Pro Tools) can use to stay in sync.

What are loops, chops, and one-shots?

One-shot samples are single drum sounds or notes. Examples are a snare drum hit or a bass note. Most of the samples used in the factory kits in Pro Tools | GrooveCell are one-shots. Loops are complete musical or rhythmic sections, usually an exact number of bars in length. Sometimes you might play loops with a drum machine or sampler, or you might use them as audio clips in your DAW’s tracks. Chops are sections cut from recordings or loops, which can then be triggered in your drum machine to create a new pattern. One of the classic techniques in hip-hop and electronic music production is to sample a section or break from a record then chop it into shorter clips and trigger them in different ways to create a new beat. 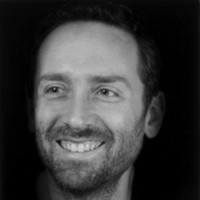