Donât Shelf It, Itâs Time to Release It!

Mike Avenaim here. If you don’t know anything about me, I’m a session drummer / music director / composer and producer based In Los Angeles. Over the years I’ve had the pleasure of working with many artists including: Scott Weiland, Lil Nas X, NOTD, Bea Miller, Ruel, Caroline Jones, Leslie Odom Jr., Emblem3 and many more.

What a lot of people don’t know about me is that I’ve been a part of writing several records of my own with some incredible musician pals, some of which never saw the light of day. Part of that reason was it was just too much hassle for me personally to figure out how to get it out to the world and how to deal with distribution. I just felt overwhelmed by the whole process. I feel with multiple writers, investors, producers etc. it becomes a real headache.

Earlier this year, I was at NAMM, walking past the Avid booth and ran into one of the best dudes in the business, Rob D’Amico. We were chatting away as we usually do nerding out about track folders and all the cool things that were coming up for Pro Tools, but somehow, we ended up on the topic of distribution and that Avid was coming out with a new platform called “AvidPlay”. Rob spent a couple of minutes walking me through the platform and it was the first time that I felt like the entire process would be really easy for me. 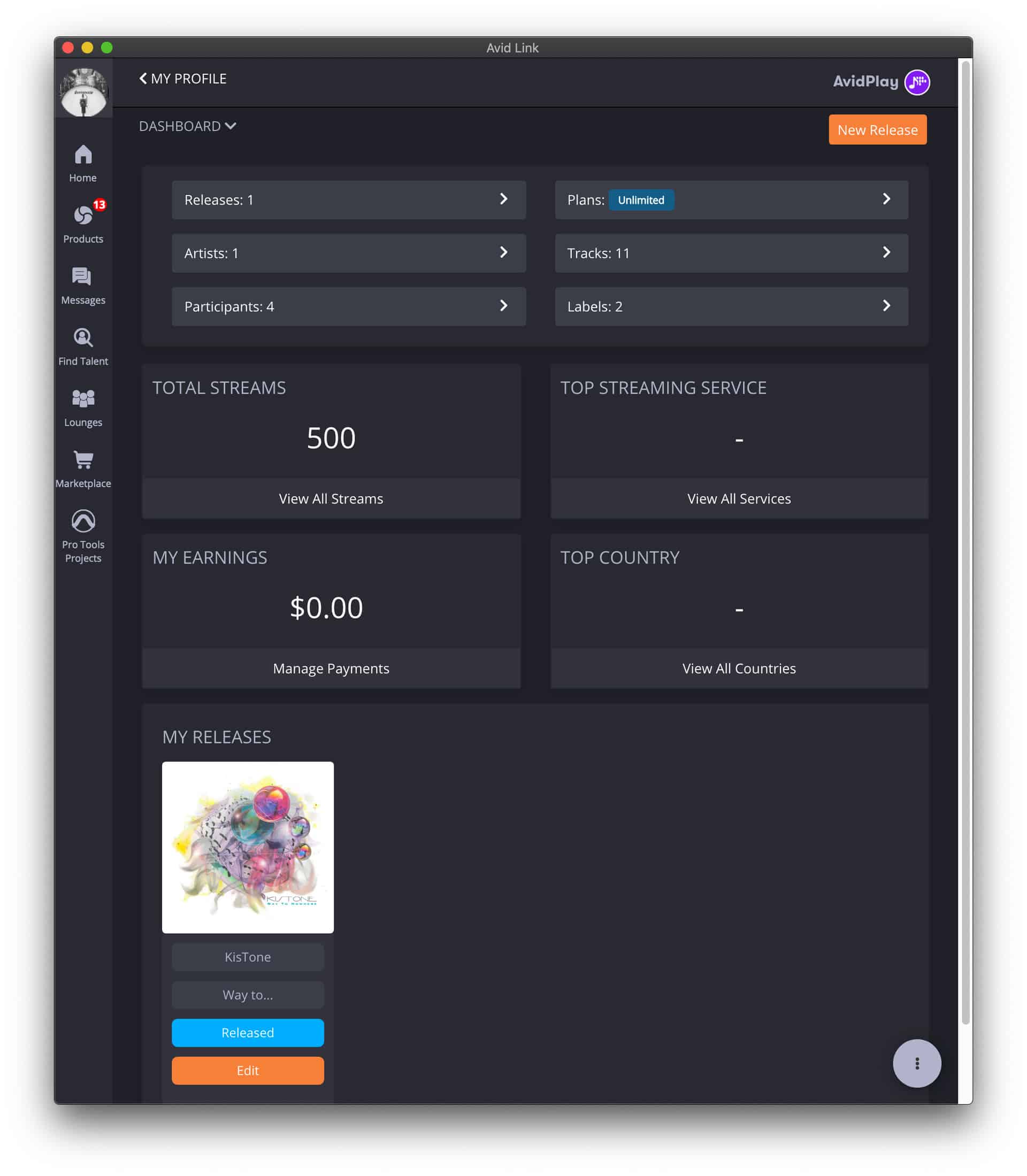 Now, back to the records I never released… I made a record in 2009 with an incredibly talented bunch of writers and producers. Lindsay Rimes, John Fields, Paul David Hager, Simon Shapiro, Leigh Walker and myself were all heavily involved in the process, but we never put the album out – the band was called “KisTone” and the album was called “Way to Nowhere”. This seemed like the perfect record for me to test out the AvidPlay platform.

Here is my experience using the platform:

I prepared my files for upload. The first thing i did was go to the AvidPlay Dashboard page inside Avid Link. My first thought was, “This is a very simple interface and super easy to use”. There is a large button to press that says “New Release”. Next is the “Release Details” page. Its a series of drop-down menus asking you to input specific information including Artist, Label and whether or not you are releasing a single or album. A great feature of the platform is that it auto fills sections like ID Type and ID Numbers. Also, once you’ve added the artist in, anytime you have a new release the information can auto populate by just simply selecting the artist again.

On the next page you upload your Artwork and then upload your tracks. It’s very simple. Next is the section where you input the specific information for each song. This was a standout feature for me because AvidPlay allows you to add “Participants” that you can recall each time you need them. There is also a feature to “Apply to all” so if you gave equal splits on every song, you don’t have to spend time inputting song split information. The ISRC codes are generated automatically, which was also a big plus for me. 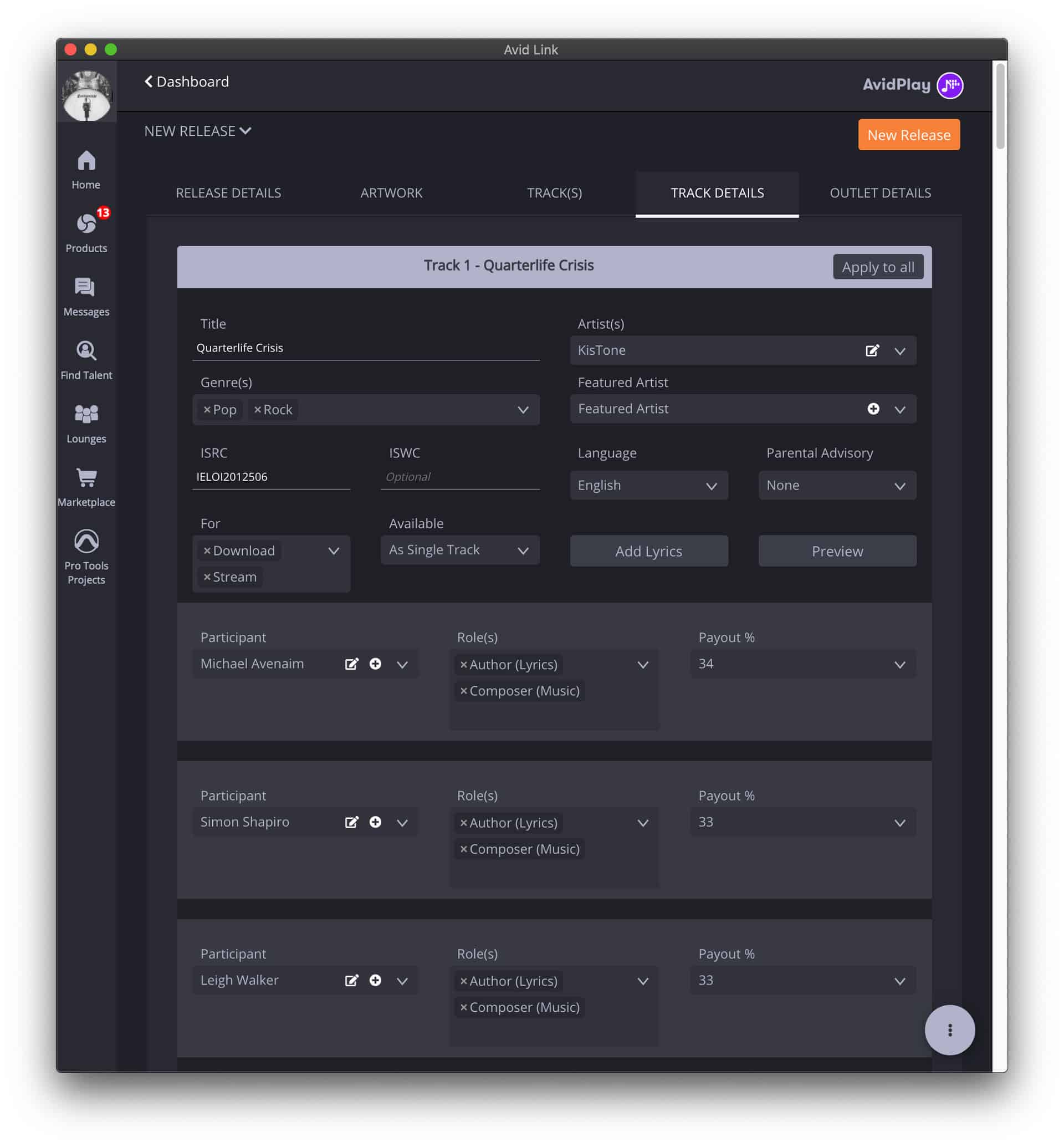 The following page allows you to select the “Outlets” you want to release your music on and the release date. You may also select the button “Distribute to all future outlets”. I felt that this was a great feature to save time in the future when new platforms become available. Once you’ve selected everything you want in this section you click “Save & Distribute”. The final step is to go back to your “Participants” page and input the PayPal details of everyone involved in the record process. AvidPlay will automatically distribute earnings to each individual from the album.

Overall the process was incredibly simple. I didn’t spend more than 10 minutes doing this entire upload. Saving time is very important to me. I didn’t have to dig through the internet on how to get music released.

Finally, there are NO HIDDEN COSTS. Once you pay for your Plan, AvidPlay will not charge you to add participants/co-writers, nor will it charge you for any future distribution etc. Other distribution platforms charge to have co-writers involved and force them to sign up and pay the annual membership fee to receive any of the money. I don’t agree with this and this is another thing that makes AvidPlay so great!

I highly recommend this to anyone that has been twiddling their thumbs on a release. Sign up and get it out so we can all hear your music!!!