Welcome to the April release for Sibelius for mobile. It’s been nine months since we first released Sibelius for mobile, and in that time, we’ve allowed the app to evolve and grow with new features and improvements based on your feedback. Today, we’re excited to share that Sibelius for mobile now contains two of the most popular user requests: Spanish translation, and Transposition. The 2022.4 update is now available on the App Store, and all the details are right here. Read on!

Onto what’s new in this release:

The team is pleased to announce the immediate release of this update to Sibelius for mobile. In this build, you’ll find a good collection of new features and music improvements, as well as a slew of bug fixes.

You can find the new Transposition feature within the More (...) dropdown menu. If your score is locked in Review Mode, the option will be hidden from the menu (just like Document Setup). Just like Sibelius on desktop, the new Transposition panel allows you to transpose a selection of the score, or the entire score (if there is no selection prior to opening the Transpose menu). You can transpose by key or by interval, and for each category, you have the choice of transposing the pitches upward or downward: 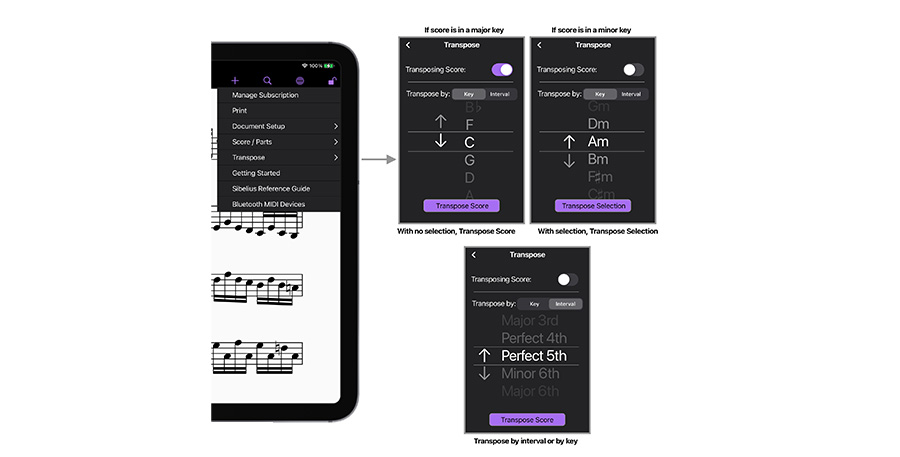 To set the transposition you need, swipe up and down on the spin controls to set the key or interval, and whether you’d like it to move up or down.

Consistent with Sibelius on desktop, transpositions made on system selections (i.e. purple) will add a new key signature to the score (except when writing with an atonal key signature), whereas non-system passage selections (i.e. blue) will transpose the notes within the current key signature. We’ve added this behavior when transposing by both key and interval. The Transpose menu can be accessed directly via the SHIFT + T shortcut (just like on desktop).

We've also exposed the "Transposing Score" option within the Transpose panel as well. This toggles between concert pitch and transposing score, and is available in both mid-tier Sibelius and Sibelius | Ultimate.

In our release last month, Sibelius for desktop included a new set of Manuscript Papers, and we’ve brought these across to mobile. To access these, start a new score from the file browser and scroll down.

We’ve also been in the process of improving the default placement of certain types of lines. In the new update, you’ll find that the improvements to octave lines from our March release (2022.3) have been brought over, and we’re introducing improvements to pedal lines. These now finish correctly at the end of a bar (rather than carrying into the next bar or system) so there’s no need to nudge these back into place. You can see the new end placements in the figure below:

The change has been made to when these lines are entered into your score, so your existing scores will look exactly the same as before, and you can enter the lines with better spacing into existing scores, too.

¡Sibelius for mobile is now also in Spanish! We’re pleased to bring our iPhone and iPad apps to our Spanish-speaking users. The Getting Started tutorials, in-app sign-up pages, menus, dropdowns, and so on have all been translated into Spanish. We’re looking forward to hearing how you get on. 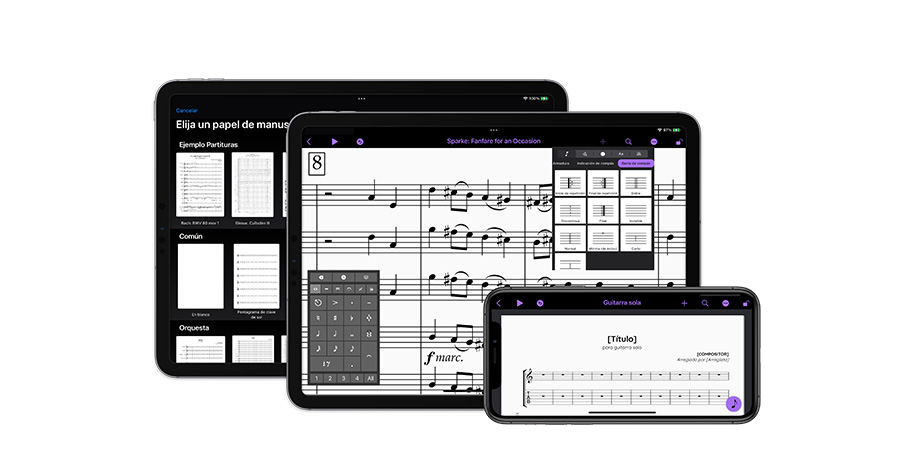 As with every release, we aim to fix a good number of bugs, and this update is no different. They are:

And that’s it! Thanks again for using Sibelius for mobile, and we look forward to hearing how you get on. You can get in contact with us on Twitter via @AvidSibelius and on Facebook.

But wait, there’s more for perpetual license holders of Sibelius

Back by popular demand, we’re pleased to announce the reintroduction of upgrades. After a successful promotion back in December last year, we’re bringing back the upgrades for perpetual license users who have older versions of Sibelius. These are now priced as follows and are available from the Avid.com online store, and from your local reseller:

This gets any perpetual license holder current with the latest versions of Sibelius across Windows, Mac, iPad, and iPhone, and includes the following:

This forms your Update and Support plan, which is renewable annually for $49/y or $99/y for Sibelius and Sibelius | Ultimate respectively.

We look forward to hearing how you get on with the hundreds of improvements we’ve made since the last time you were current with Sibelius. If you need a reminder of some of the improvements, check out this list. 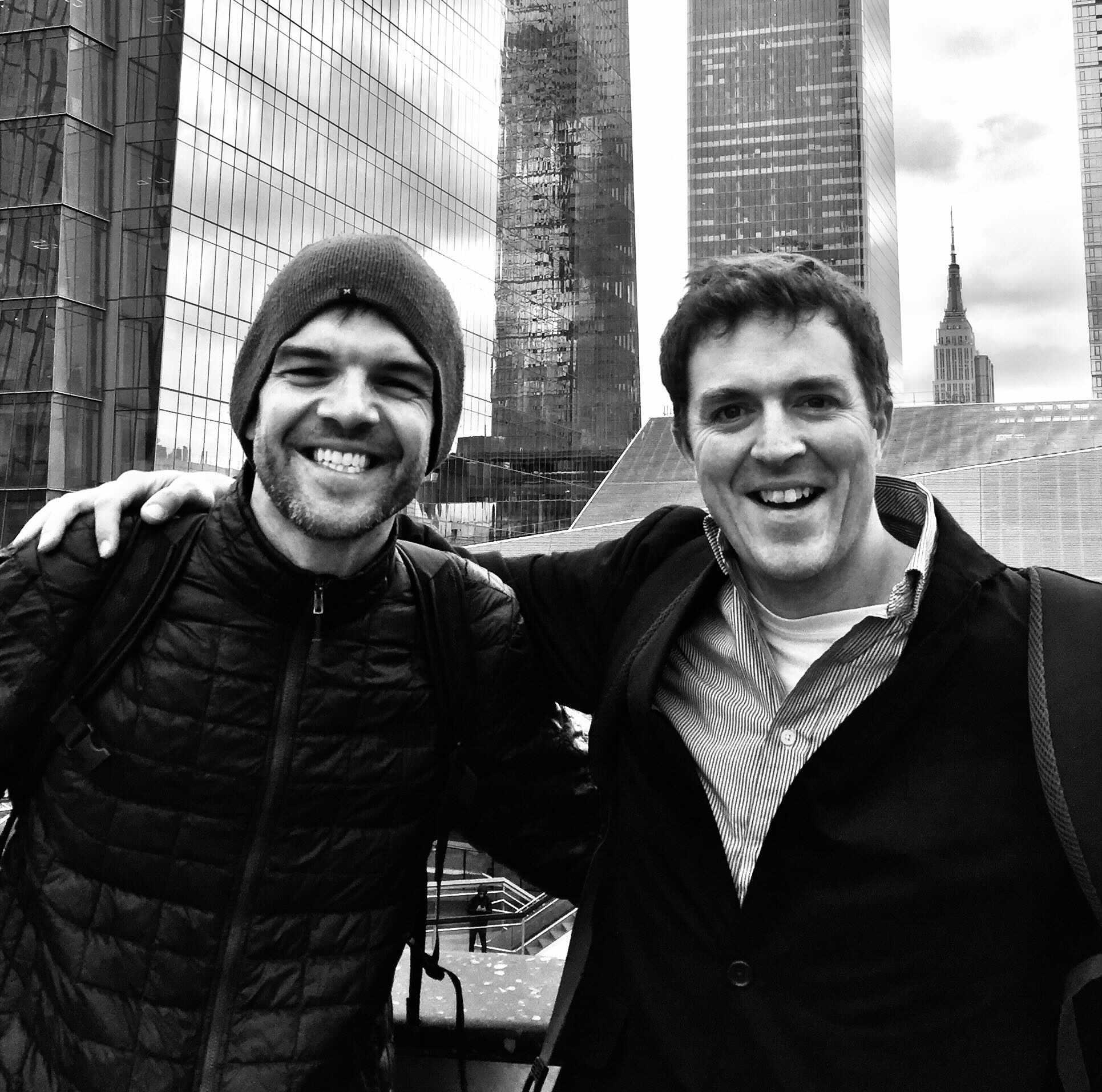 Sam Butler and Joe Plazak
As director of audio software at Avid, Sam works with all the departments in Avid to produce the future of the Pro Tools and Sibelius products and solutions, while Joe scores the Sibelius hat trick: working as a developer, designer, and product owner.